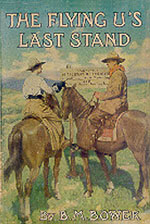 When a young lady tries to enlist Andy Green's aid to lure settlers to Montana he isn't interested, until he learns the land was part of the Flying U. Andy and his pards get themselves "fired" but the ranch...

A total of 28 chapters