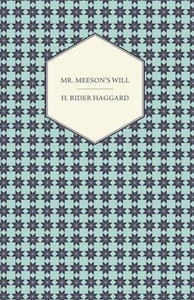 Henry Rider Haggard was born at Bradenham, Norfolk, to Sir William Meybohm Rider Haggard, a barrister, and Ella Doveton, an author and poet. He was the eighth of ten children. He was initially sent to Garsington Rectory in Oxfordshire to study under the Reverend H.J. Graham but, unlike his older brothers who graduated from various Public Schools, he ended up attending Ipswich Grammar School. This was because his father, who regarded him as somebody who was not going to amount to much, could no longer afford to maintain his expensive private education. After failing his army entrance exam he was sent to a private ‘crammer’ in London to prepare for the entrance exam for the British Foreign Office, which in the end he never sat. Instead Haggard’s father sent him to Africa in an unpaid position as assistant to the secretary to the Lieutenant-Governor of Natal, Sir Henry Bulwer. It was in this role that Haggard was present in Pretoria for the official announcement of the British annexation of the Boer Republic of the Transvaal. In fact, Haggard raised the Union Flag and was forced to read out much of the proclamation following the loss of voice of the official originally entrusted with the duty. As a young man, Haggard fell deeply in love with Lilith Jackson, whom he intended to marry once he obtained paid employment in South Africa. In 1878 he became Registrar of the High Court in the Transvaal, but when he sent his father a letter telling him that he intended to return to England in order to marry Lilith Jackson his father replied that he forbade it until he had made a career for himself. In 1879 he heard that Lilith had married someone else. When he eventually returned to England he married a friend of his sister, Mariana Louisa Margitson and brought her back to Africa. Later they had a son named Jock (who died of measles at the age of 10) and three daughters. Returning again to England in 1882, the couple settled in Ditchingham, Norfolk. Later he lived in Kessingland and had connections with the church in Bungay, Suffolk. He turned to the study of law and was called to the bar in 1884. His practice of law was somewhat desultory, and much of his time was taken up by the writing of novels. Heavily influenced by the larger- than-life adventurers he met in Colonial Africa, most notably Frederick Selous and Frederick Russell Burnham, the great mineral wealth discovered in Africa, and the ruins of ancient lost civilizations in Africa such as Great Zimbabwe, Haggard created his Allan Quatermain adventures. Three of his books, The Wizard (1896), Elissa; the doom of Zimbabwe (1899), and Black Heart and White Heart; a Zulu idyll (1900) are dedicated to Burnham's daughter, Nada, the first white child born in Bulawayo, herself named after Haggard's 1892 book: Nada the Lily. Years later, when Haggard was a successful novelist, he was contacted by his former love, Lilith Jackson. She had been deserted by her husband, who had left her penniless and infected her with syphilis, from which she eventually died. It was Haggard who paid her medical bills. These details were not generally known until the publication of Haggard's 1983 biography by D. S. Higgins. Haggard was heavily involved in agricultural reform and was a member of many Commissions on land use and related affairs, work that involved several trips to the Colonies and Dominions. He was made a Knight Bachelor in 1912, and a Knight Commander of the Order of the British Empire in 1919. He stood unsuccessfully for parliament as a candidate for the Conservative Party. Source: Wikipedia

A total of 23 chapters